I am not fighting alone.

Although I was familiar with Haikyuu!!, I knew nothing about its story or characters. In fact, it took me a while to actually pick up the series myself. In retrospect, much of my indifference was probably due to the fact that I just wasn't interested in the sports genre. A lot of what I had flipped through in the past, driven by my own curiosity, contained characters doing ridiculous, reality-breaking things that... didn't appeal to me. I couldn't really relate to any of it. Prior to Haikyuu!!, the most sports-like anime I had watched and enjoyed were probably... Free!? Yuri!!! On Ice? So... nothing.

Of course, that isn't to say I was never interested in Haikyuu!!. It looked like a lot of fun, and the fanart that popped up on my feed on occasion was cute. When Aku's online TCG, Champion, opened, I became even more curious and started to seriously consider watching or reading it. The cards were gorgeous, and the concept had that right blend of challenge and enjoyment. I wanted to join, but I knew that my experience with Shounen Jump titles was quite limited. There would only be a few decks I would be interested in collecting. At the same time, though, I knew that it was a problem that could be easily remedied. After joining, I started picking up Shounen Jump series I had never read before, including Death Note (years after it had ended!!!). But even though Haikyuu!! was high up on my to-do list, I ended up not trying it out then.

Nevertheless, the first time I ever saw Asahi was on a small card from his deck in the TCG! Despite knowing nothing about him, I found myself a bit curious... I really liked his long hair and his bun?! before trading the card away for something else—WHOOPS. In fact, I traded out tons and tons of Haikyuu!! cards since they were so popular with many of the other players! LISTEN. I HAD MY OWN DECKS I WANTED TO COLLECT AND MASTER. I'm so sorry, please forgive me my precious volleyball children. /sobs

A few years later, I finally started watching Haikyuu!! on my own. Since I was fresh from finishing a different anime series—one that I had taken a long, long break from—I was in the Anime Mood. Seeing as how Haikyuu!! was a series that had interested me for a while, with a little encouragement from a few friends, I dove right in. Immediately, I fell in love.

Much of what drew me back from trying out sports anime/manga in the past was hardly felt in Haikyuu!!. Sure, there are prodigies. Sure, there are players that have some freakish abilities. At the same time, though, many of the characters you meet are just average, dedicated people who really enjoy volleyball. What makes the series even more enjoyable is watching how everyone grows beyond their talents and learns to work together as a team. Also, I love underdog stories!

When Asahi made his first appearance, I knew he would be one of my favorites! In a way, falling for him was inevitable given my history of favorite characters. Big, intimidating-looking guys who are actually giant softies at heart? Yep. My type.

Even though I love Asahi and was moved by his story arc, I was still waffling over whether or not to make a site for him—even if it was just a fanlisting. I already had a project dedicated to a gentle giant, and I felt a lot of what I touched upon—or plan to touch upon—in that shrine could also apply to Asahi in some ways, too. I didn't want to repeat myself, and I wasn't sure if I wanted—or even had the time—to make something for a similar character. Of course, my reservations didn't stop me from screaming and yelling about his precious self whenever Haikyuu!! came up in a conversation. 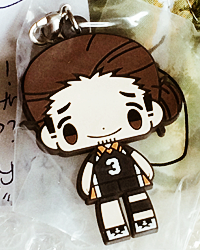 A few months later, I got a surprise in the mailbox from the 100% pure Megan! Wrapped snuggly in the bubble wrap was a rubber strap of Asahi AND I FREAKED OUT BECAUSE IT WAS TOTALLY UNEXPECTED AND SO ADORABLE??? LOOK AT THAT FACE. ｡ﾟ( ﾟஇ‸இﾟ+)ﾟ｡ In her cute letter, Megan mentioned his fanlisting and so... here we are! This probably shouldn't come as a surprise at all, considering how she was also the one to convince me to finish Hunter x Hunter. Yeah. You know that one anime series I mentioned before that I took a long, long break from? The one that got me in the Anime Mood to watch Haikyuu!!? THAT WAS HUNTER X HUNTER. Basically, it would've taken me even longer to pick up Haikyuu!! and meet Asahi if it weren't for Megan. Thank you so much! ilu. ⁽⁽ ◟(灬 ˊωˋ 灬)◞ ⁾⁾

When I applied for the fanlisting at Anime Fanlistings, I was surprisingly approved a day later on April 25th, 2017! Since I was making a slew of new layouts at the time, I decided to ride the wave of productivity, finishing everything and opening the site on April 26, 2017.

Generally, I don't really talk about layout specs because 99% of what I make is just me murdering my Photoshop canvas with textures and weird effects. However, I feel I have to explain myself regarding the way I colored Asahi's... shirt.

OKAY, SO LISTEN. I wanted to try making a layout with softer, more pastel colors since Asahi is a fluffy, precious, pure soul. Since I had zero ideas at the time, however, I ended up taking some inspiration from my Twitter on a whim—which had this tweet pinned to it at the time. Once I finished coloring his shirt and proceeded to do a billion other Photoshop things, I suddenly thought, "Hey. This teal color... seems familiar... Shit." In other words, I KNOW THE COLORS ARE OIKAWA COLORS AND NOT KARASUNO COLORS; I'M SO SORRY. Regardless, I... hope you enjoy the look either way...??? (☍﹏⁰)｡

Also, if you're looking at this layout right now and thinking, "Wow, this person really doesn't know how to color manga panels," you are absolutely correct?! This was my first time trying to color something after about... a decade (whoops), so please excuse, uh, whatever basic lighting/art logic I broke. If it looks like I gave up halfway through, that's also kind of true since my trackpad started to have some sticky clicking and... yeah.

Some trivia: I decided to reuse some backgrounds (paper! wood!!!) that I used in the layout of Easy Breezy, my shrine/fanlisting to Tachibana Makoto of Free!. Asahi and Makoto are similar characters in a lot of ways, and since I have a penchant for gentle giants, I decided to subtly ~ connect ~ the two via their layouts. /cheese

When it came to finding a name for the site, I actually had a few ideas in mind. In the end, however, I decided to go with Glass Heart, taken from that one line in Chapter 37. I felt that "glass heart" described Asahi perfectly—someone who is insecure and a bit timid, but who also possesses a kind and sensitive soul.

Azumane Asahi
A healthy 17 year old
(With a glass heart)
Chapter 037: "Into the Fray"

"Glass heart" was also the name of Asahi's deck in the online TCG, Champion. As I mentioned previously, before actually watching and reading Haikyuu!!, I traded away all of my Haikyuu!! cards away without a second thought—including Asahi! Thus, the site title is... also a... small reminder of those dark times when I was dumb small way of pretending I never traded away a single card and mastered the deck, okay... THIS IS MY MASTERY BADGE; LEAVE ME ALONE.